Having just moved out recently from his parent’s house, Corey Dickson seems to have a lot to learn after his flatmate accused him of putting an empty milk bottle back in the fridge.

“I couldn’t believe it! I woke up to make my religious cup of morning coffee, and low-and-behold, there’s an empty milk bottle in the fridge!” exclaimed Sam Lowey, 24, of the Perth suburb of Subiaco.

It all started the previous night when Sam and Corey were playing video games and Sam decided to call it a night.

“It wasn’t late, but I had an early start the next day. I left him on the couch, went and had a shower then straight to bed” said Sam, still visibly distressed by the ordeal.

Corey and Sam’s other flatmate, Janelle, had been away, and no one else was in the house when Sam went to bed.

It was Corey’s alarm clock that actually woke Sam the next morning.

“I couldn’t believe it, not only did he drink the last of the milk, but he put the empty milk bottle back in the fridge, and now his alarm was going off.

Sam decided to ignore the alarm, and headed straight for the kitchen to prepare his coffee.

“I always get the milk out of the fridge first. I opened the door, and wham! It was like an uppercut to the jaw, seriously! I can’t remember the last time I was that upset!” Sam’s voice clearly trembling as he relayed his story during our phone interview.

Extremely angry by this point, Sam went to Corey’s room to approach him about the empty bottle, but his door was locked and his alarm was still going off.

“I was ready to kick his door down, but common sense got the better of me. I went and got ready for work, and grabbed a coffee on the way to the train station. He will be paying for the coffee, let me tell you!”

Yes, Corey’s alarm was still going off when Sam got home. 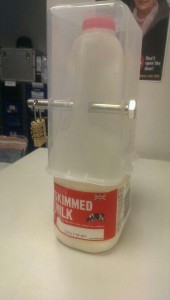 17 Rollercoaster Stages after Losing a Flatmate