Reddit is a wonderful place. It’s filled with people discussing the importance of organic clean living, people trying to sell their car/younger brother and at least 1.1 million cat videos. The options are endless as you scroll through the hot topics. So when we came across a thread titled “Flatmates from Hell”, we knew it had to be saucy. And something definitely worth sharing.

Firstly, there is the guy that just didn’t bathe. EVER.

1. Last year I moved in with my SO and his housemate (we have since moved again) and the guy we used to live with was disgusting. He was an avid gamer (nothing against that at all I spend most of my free time PC gaming and occasionally console too) but his room stank of a combination of jizz, BO and gone off food, and there was literally no floor space because everything covered in dirty clothes and plates. He would shower maybe once a week, never tidied up after himself (his mum would come around and tidy his room…bear in mind he’s in his mid 20s!) In the 7 months my SO lived with him he used the washing machine twice. Once because he got so drunk he puked over his bed, so technically only one clothes wash.”

And then we’ve got the guy (are we seeing a gender trend here???) who put laxatives in his flatmates milk. Ummm…

Read more: How to have the talk with your flatmate. Yes, THAT talk.

2. So, I went to the doctor the other week and they said I have an unknown (totally un-serious) bowel problem and the doctor prescribed me laxatives to clear my system out. I got home and told my flatmates and one of them took me aside and told me that I really shouldn’t take them. It turns out that he had a pang of guilt and explained that he’d been spiking my milk with laxatives, but he was unsure what a double dose of laxatives would do so he warned me against taking them.”

It gets MUCH worse.

3. “I lived with someone in my uni days who continually did very strange things. For instance, I came home one day to find her attempting to cook an entire duck in my toaster oven. Those things are not very big.”

4. “This girl I met once said she came home to find her lunchbox filled with water and some undies soaking in there. They were her housemate’s period undies.”

5. “I used to live with a girl who had ADHD and she would get up in the middle of the night and rearrange all the living room furniture.”

6. “An old flatmate was totally gym obsessed, she’d hang up A4 images of ripped six packs in her room, in the bathroom, on the fridge. Really annoying for someone who just wanted to eat ice cream without having to look at biceps.”

7. “One day I came home and my roommate was like ‘hey I painted a mural’ and then I looked outside the kitchen window and she had gone on the roof and spray painted this giant silver moon with the caption ‘Queen of sparrows’ and I was thinking: Oh for Christ’s sake, we will never get our bond back.”

8. “My friend once went into her flat mates room and saw a photo of her own mum.”

9. “We had a housemate who would just put her pole dancing pole up in front of the TV when we were watching a movie. That was massively awks.”

10. “My roommate used to constantly steal my cheese and that stuff is expensive so I had to start carving my name into the block like ‘I Know What You Did Last Summer’- style and they eventually stopped.

Have you ever had a flatmate worst than this? We want to hear from you.

Want more? Why not try:

8 signs your flatmate has become your BAE.

Signs your flatmate thinks it’s you, not them.

Flatmate sprung leaving used butter knife next to the sink.

flatmate from hellflatmates
By Matilda Rudd 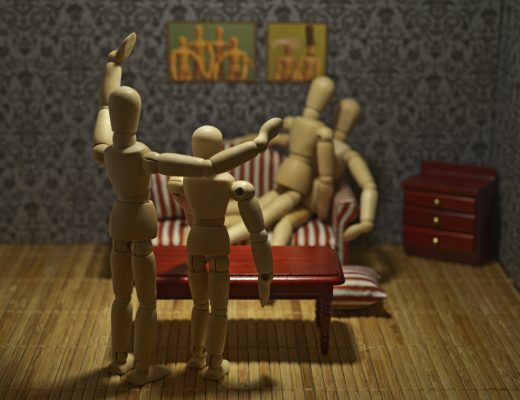 4 ways to share the bathroom with your flatmates hygenically